Amazon shipping service becoming the next giant in the UK

Taking full advantage of the fact that it has become one of the most important online selling platforms in the world, Amazon decided to compete in the shipping market as well. This decision marks another step in Amazon’s moves to build its homegrown logistics services, while the service reduces sellers’ reliance on third-party providers, such as UPS and FedEx.

Sellers will have a newer quick and efficient way to ship their products, while Amazon will try to take over the third party shipping companies’ services. Few details have emerged, but last fall CNBC reported that “Amazon Shipping” was offering to take goods from sellers’ warehouses to Amazon fulfillment centers at cheaper prices than UPS or FedEx, and that the service was being tested in Los Angeles.

Amazon’s expansion of its shipping business is part of a longer-term strategy to grow its logistics services capabilities. In December, Amazon expanded its air fleet by 50 planes. It’s also opening several regional air hubs, including a $1.5 billion hub at Cincinnati/Northern Kentucky International Airport, slated to open in 2021. It’s a means to make money beyond the company’s retail and cloud business.

This is seen as a transition period for Amazon, in which the company is trying to rediscover its advertising business as well as the classic sales activity. According to a recent report which cited data from consultancy company Shipmatrix, Amazon is currently handling 10% of its own shipping traffic. Meanwhile, USPS handles 62 percent of Amazon’s traffic, UPS handles 21 to 26 percent and FedEx handles 8 to 10 percent.

Amazon, as a company, has already firmly established itself as the UK’s fourth largest courier by parcel numbers, and that’s if haven’t already overtaken Yodel. Only Hermes and Royal Mail deliver more parcels but that could change in the near future.

In the UK, there are a number of less known third-party mail providers who supposedly compete with Royal Mail but still use Royal Mail to carry out final mile deliveries. That’s likely to remain the same over the next few years, but Amazon will be looking for profitable volume and can pick and choose as they ramp up, unlike other couriers who build warehouses and often to fill capacity take volume which has little or no profit.

Amazon is playing a long term game with logistics and one day soon we will see the Amazon shipping service becoming the biggest courier services in the country. 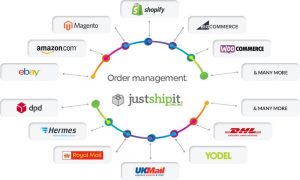 This is great news for online sellers using Amazon as their main selling platform, because it means faster and cheaper deliveries. If you sell on multiple platforms, not only on Amazon, just like any of our customers who use JustShipIT, you will need to use a service that’s integrated with Royal Mail, UK Mail, Yodel, DPD, Collect+, Click & Drop and many more. 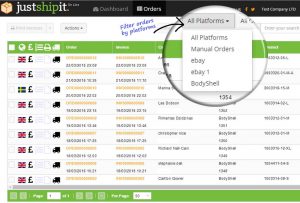 This will allow you, as a seller, to take care of the sales and shipping process as a whole. With JustShipIT you can export your orders to different carriers (DHL, TNT, DPD etc.) to update tracking with ease. Also, to help sellers save time, JustShipIT has built-in dispatching to update the order status on each platform once an item has been shipped.

Contact us anytime by phone (0121 285 1050 for Sales, 0121 285 1051 for Support) or by email (support@justshipit.co.uk) to receive all the details you might need for starting your multiple platform integrated shipping activity with JustShipIT.

Please enter the email address
associated with your account.

We use cookies on our website to give you the most relevant experience by remembering your preferences and repeat visits. By clicking “Accept”, you consent to the use of ALL the cookies. Settings ACCEPT Decline
Manage consent

This website uses cookies to improve your experience while you navigate through the website. Out of these, the cookies that are categorized as necessary are stored on your browser as they are essential for the working of basic functionalities of the website. We also use third-party cookies that help us analyze and understand how you use this website. These cookies will be stored in your browser only with your consent. You also have the option to opt-out of these cookies. But opting out of some of these cookies may affect your browsing experience.
Necessary Always Enabled
Necessary cookies are absolutely essential for the website to function properly. This category only includes cookies that ensures basic functionalities and security features of the website. These cookies do not store any personal information.
Non-necessary
Any cookies that may not be particularly necessary for the website to function and is used specifically to collect user personal data via analytics, ads, other embedded contents are termed as non-necessary cookies. It is mandatory to procure user consent prior to running these cookies on your website.
SAVE & ACCEPT